Throughout human history, there have always been famous people. The definition of fame is “the condition of being known or talked about by many people, especially on account of notable achievements,” and when looking through the pages of history, right up until our modern age, there is no shortage of people who fit into this category.

We have Alexander the Great, one of the most brilliant military minds and powerful leaders the world has ever known, and one who conquered most of that world in his short 32 years on this planet. There was William Shakespeare, English poet, actor and playwright who is generally regarded as the greatest writer that the English language has ever known. And there was also Albert Einstein, perhaps the most famous scientist to ever live, who is considered the father of modern physics and helped to revolutionize the way in which we view the world through his theories.

The above are just three examples from a list of literary thousands of famous people, all of which who through their contributions (not always good ones) influenced and helped shape the world and the people who live in it. However, in our modern day, the notion of fame seems to have taken a different meaning, for we are constantly seeing the rising of so called celebrities and famous people who, by all measures, haven’t really done anything noteworthy or made any real contributions to the world, and yet, they are still adored by millions. And in case you are looking for an example of someone who fits this description, you need not looking any further than Kim Kardashian.

So why is Kim Kardashian famous? That’s a good question, and depending on who you ask will likely determine the answer you get. Initially, it wasn’t Kim who was famous, rather, it was her father Robert who first put the Kardashian name into the spotlight after he successfully defended O.J. Simpson in what was dubbed the “trial of the century.” After that, Kim started to become more famous and more recognizable through her association with then best friend Paris Hilton. And seemingly taking a cue for her, after the release of a controversial sex tape, Kim Kardashian seemingly became a household name overnight.

From that point Kim’s antics and actions have garnered her much attention; from her 72-day long second marriage to basketball star Kris Humphries to her television show that showcases everything and anything her and her family does, to her most recent marriage to Kanye West, it seems that Kim Kardashian is everywhere. And with an audience of nearly 100 million followers on Instagram and 50 million on Twitter, it doesn’t seem like she is going anywhere; and when you take into account that she makes an estimated $300,000 per sponsored post, it is no wonder that she wants to stay in the spotlight. However, when compared to the likes of Shakespeare, Einstein, and Washington, it seems that we have all decided to relax our definition of fame.

Love her or hate her, Kim and the rest of the Kardashian are seemingly here to stay, and when asked why people are so enthralled with her and her actions, one of the most common responses is that people enjoy getting a glimpse into the lifestyle she lives. High fashion, exotic travel, monstrous homes and a fleet of prestigious, high-end cars. And it is that last point that we are going to take a look at today.

So how does one of the most famous people in the world get around town? Glad you asked, because here are some of the most impressive cars in the Kim Kardashian fleet, and just to make things a little more interesting, we decided to include some of Kanye’s rides too. After all, marriage is all about sharing the things you have, right?

Anytime you are talking about the rich and famous - more specifically, the cars they drive - you can almost rest assured that parked in the driveway or in the garage of one of their many lavish homes, you will find a Bentley. Needless to say, Kim is no exception to this very expensive, yet almost unwritten rule.

Most of us are familiar with luxury automotive giant known as Bentley, however, that familiarity is usually exclusive to reading about them or reading about the people who drive them, for, with a sticker price of nearly a quarter million dollars, that's about as close as most of us will to a Bentley Continental GTC. That fact, however, does not detract from how impressive this car really is. Kim chose to deck hers out in all black, which would likely make for quite the sight, especially when you consider that a 582hp engine with an eight-speed automatic transmission is powering it down the road. Bentleys are a perfect combination style, class, and exclusivity, which seems like the perfect embodiment of something that Kim Kardashian would choose to drive. 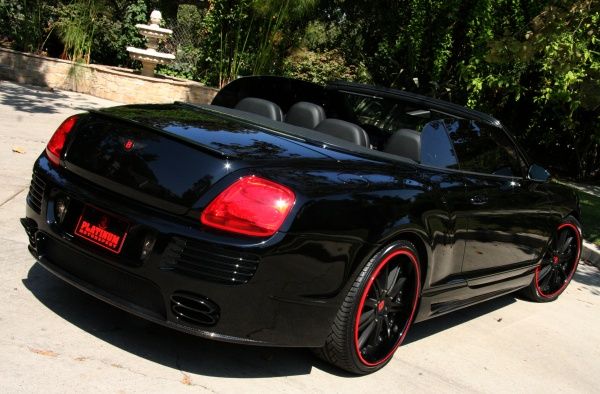